The valley of the Thracian kings 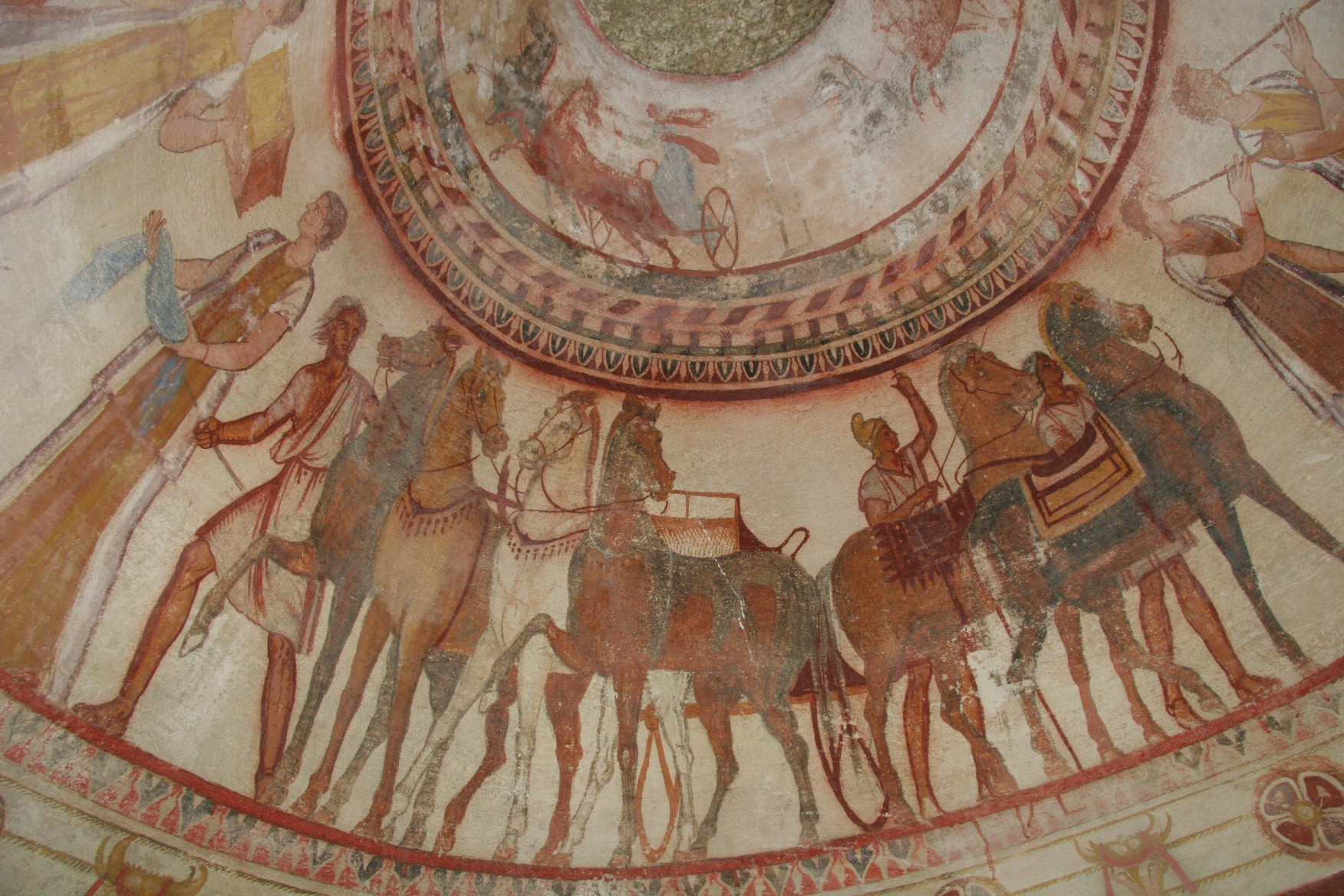 The Thracian tomb is a masonry round-domed tomb located in Kazanlak and is part of a large necropolis located near the ancient capital of the Odrysian kingdom Seuthopolis. It is dated to the end of the 4th century BC - the beginning of the III century BC and since 1979 has been on the UNESCO World Heritage List. It consists of a corridor, a rectangular burial chamber, and a round burial chamber.

The tomb belonged to the Thracian ruler Roygos. It was discovered accidentally on 19th April 1944 under a mound of soldiers, who were digging a trench in the northeastern part of Kazanlak.

The corridor is built of rough, untreated stones. Both chambers are made of bricks welded with mortar, and their walls and floors are covered with three-layer plaster, on which are painted murals in tempera and fresco techniques. The tomb has a rectangular shape. Remains of a man and a woman were found in the cell, as well as horse bones in the corridor in front of the chamber.

The tomb is worldly famous for its unique frescoes in the corridor and the dome room - one of the best-preserved frescoes from an ancient painting. The decoration shows separate moments from the earthly life, military life, and the afterlife of the Thracian leader, who lays in it.

The tomb of Seuthes III in the Golyama Kosmatka mound, one of the largest mounds in Thrace, was discovered in the autumn of 2004. It is located 1 km south of the town of Shipka. The objects found in the tomb date from the end of the 4th - beginning of the 3rd century BC.

The temple has been used for more than a century to perform religious ceremonies (so-called Orphic mysteries) by Thracian priests.

The mound is made like a sacred hill. A wide alley leads to the facade and the entrance.

The tomb consists of a corridor and three rooms. The first room is rectangular and covered with a false vault. A skeleton of a horse was found in it. The second room has a round shape and a domed roof. The last chamber is similar to a sarcophagus, made by carving a granite block weighing about 60 tons, on which is placed a second, shaped pediment. In this room were found most objects, modeled ritual bed and table, which testify to a particularly lavish funeral.

Shushmanets temple is a masterpiece of Thracian architecture. It is located near the town of Shipka, opened in 1996.

Its design and execution are unusual. It consists of a wide user, a vestibule with a semi-cylindrical vault, and a round domed chamber, whose surfaces are covered with fine shiny white plaster. In the middle of the vestibule there is a pronounced ionic column, and in the center of the round chamber rises a massive Dorian column.

Apart from the animals (4 horses and 2 dogs sacrificed and noted on the floor of the vestibule), no information has been published about the presence of another inventor, including dating materials.

In 1993 the grave-cult complex Ostrusha was discovered under the eponymous mound near the town of Shipka.

The complex is located on an area of ​​100 square meters and consists of five rectangular and one round rooms. The tomb is built of 2 monolithic stone blocks with a total weight of 60 tons. The first block is in the shape of a cube, in which the burial chamber is located, and from others, a roof structure is made. Of particular interest is the ceiling of the tomb - in the precisely carved ornaments, you can see portraits of people and figures of animals and flowers.

A horse skeleton, weapons, a silver jug, silver ornaments (applications) for horse ammunition, a flask, coins of Philip II of Macedon, ceramic vessels, and other objects of high artistic value were found in the mound.

A tomb in the Helvetia mound dates from the middle of the 4th century BC. It was discovered in 1996. The archeological site is part of the Shushmanets mound necropolis and is located near the town of Shipka. It consists of a long and wide corridor, an entrance hall, and a chamber.

The walls of the corridor are made of quarry stones. The vestibule and the chamber have a rectangular plan and a double-sided arched covering. Horizontal and vertical grooves are applied on it as if the wall is made of large marble blocks. The entrance to the chamber is closed by a double-leaf coffered stone door. Opposite the entrance is a bed. The remains of the last burial are larger in antiquity, and only in the vestibule was found intact skeleton when sacrificing a horse.

The mound of the Griffons

The burial facility at the Griffon's Mound was discovered in 1996. The mound is located between the town of Shipka and the village of Sheynovo. The tomb dates back to the 4th century BC and was looted in antiquity - the only objects found were two gold beads.

Until the discovery of the burial facility at the Golyama Kosmatka mound, the domed tomb at the Griffon Mound was the largest known Thracological dome facility in Thrace.

In the Mound of the Griffons, a tomb has been studied, consisting of a long corridor and two chambers. A facade decorated with two pilasters and a relief pediment frames the entrance. The walls of a long corridor, discovered in antiquity, are next to the façade, which is only covered by flat and curved tiles.

The entrances to the vestibule and the domed chamber were closed with stone doors. The floors of the two rooms are covered with granite, which is plastered. Opposite the entrance of the chamber is a bed made of stone slabs. In front of the logo, there is a step made of a stone block, on which shiny paws are modeled. 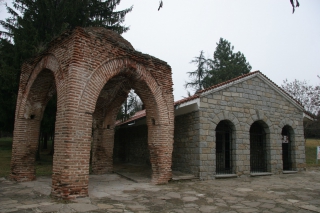 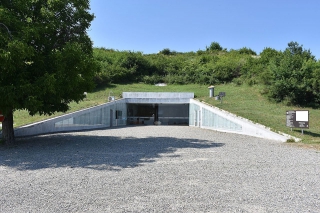 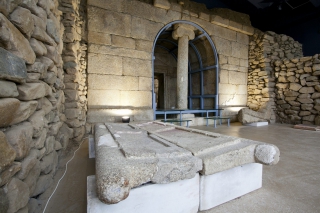 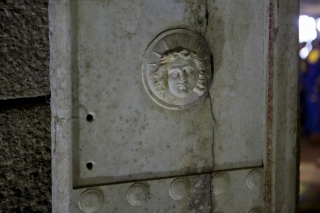 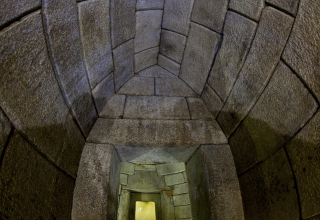 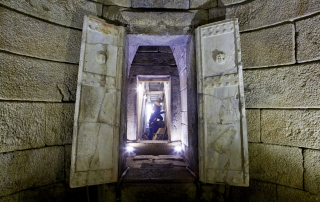 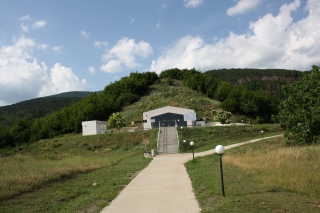 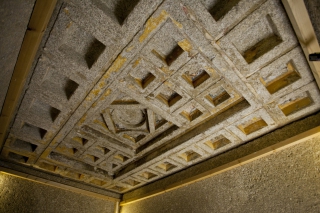 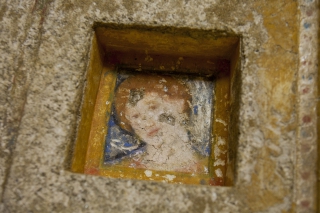